“We created a new standard for the HEDT market when we launched our first Ryzen Threadripper
processors a year ago, delivering a ground-breaking level of computing power for the world’s most
demanding PC users,” said Jim Anderson, senior vice president and general manager, Computing and
Graphics Business Group, AMD. “Our goal with 2nd Gen Ryzen Threadripper processors was to push the
performance boundaries even further and continue innovating at the bleeding edge. Beginning on August
13, creators, enthusiasts, and gamers everywhere will get to experience the benefits of these new
products.”

During an event in front of global press, industry analysts, and partners last month, 2nd Gen Ryzen
Threadripper 2990WX processors were put through their paces and have already broken world records1
in the Cinebench R15 multi-threaded CPU test. The AMD Ryzen Overclocking Team managed to push the
2nd Gen AMD Ryzen Threadripper 2990WX CPU to over 5.1GHz on liquid nitrogen, achieving record
breaking performance with a score of 7,618, beating the current single socket record set by the
competition’s Core i9-7980XE CPU at 5,828 points. The freely available Ryzen Master Software utility gives
broad control of CPU2settings allowing users to squeeze every drop of performance from their CPU. 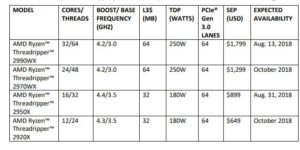 All 2nd Gen AMD Ryzen Threadripper processors support the SocketTR4 platform, sporting sixty-four
PCIe® Gen 3.0 lanes, and quad channel DDR4 memory with ECC support 3. All 2nd Gen AMD Ryzen
Threadripper CPUs are supported by a full ecosystem of new and existing X399 platforms at launch, with
designs already available from top motherboard manufacturers including ASRock, ASUS, Gigabyte, and
MSI. Along with the broad selection of motherboards, the SocketTR4 platform supports a wide range of
new and existing cooling solutions, including the new Wraith Ripper air-cooler showcased at Computex
2018. This cooler is now available from CoolerMaster and features compatibility with the SocketTR4
platform and all 1st Gen and 2nd Gen Ryzen Threadripper processors.

“At Fox VFX Lab we use AMD technology extensively. Our workstations are custom built, based on
water cooled Ryzen Threadripper processors. Unreal engine artists easily peg every core at 100% during
lightmass calculations,” said Ron Fischer, Director of Information Technology, Fox VFX Lab. “We work in
real-time at the front of the production pipeline, and things move very quickly here, at the speed of
imagination. AMD helps keep the pace as we define the future of virtual filmmaking.”

“From film, TV, animation and motion graphics to art design & visual development, Jellyfish Pictures’
focus is delivering uncompromised creative artwork to the world” said Jeremy Smith, CTO at Jellyfish
Pictures. “Our goal is to empower creative professionals to freely imagine, design, build and create
without limitations, and with AMD’s Ryzen Threadripper we know we are offering unrivaled highperformance
computing technology.”

About AMD
For more than 45 years AMD has driven innovation in high-performance computing, graphics and
visualization technologies ― the building blocks for gaming, immersive platforms and the datacenter.
Hundreds of millions of consumers, leading Fortune 500 businesses and cutting-edge scientific research
facilities around the world rely on AMD technology daily to improve how they live, work and play. AMD
employees around the world are focused on building great products that push the boundaries of what is
possible. For more information about how AMD is enabling today and inspiring tomorrow, visit the AMD
(NASDAQ: AMD) website, blog, Facebook and Twitter pages.

AMD, the AMD Arrow logo, Ryzen, Threadripper and combinations thereof, are trademarks of Advanced Micro Devices, Inc. Other names are forinformational purposes only and may be trademarks of their respective owners.

Cautionary Statement
This press release contains forward-looking statements concerning Advanced Micro Devices, Inc.
(AMD) including the features, functionality, availability, timing and expected benefits of AMD’s current
and future products, including 2nd Generation AMD Ryzen™ Threadripper™ processors, which are made
pursuant to the Safe Harbor provisions of the Private Securities Litigation Reform Act of 1995. Forwardlooking
statements are commonly identified by words such as "would," "intends," "believes," "expects,"
"may," "will," "should," "seeks," "intends," "plans," "pro forma," "estimates," "anticipates," or the
negative of these words and phrases, other variations of these words and phrases or comparable
terminology. Investors are cautioned that the forward-looking statements in this document are based on
current beliefs, assumptions and expectations, speak only as of the date of this document and involve
risks and uncertainties that could cause actual results to differ materially from current expectations. Such
statements are subject to certain known and unknown risks and uncertainties, many of which are difficult
to predict and generally beyond AMD's control, that could cause actual results and other future events to
differ materially from those expressed in, or implied or projected by, the forward-looking information and
statements. Material factors that could cause actual results to differ materially from current expectations
include, without limitation, the following: Intel Corporation’s dominance of the microprocessor market
and its aggressive business practices may limit AMD’s ability to compete effectively; AMD has a wafer
supply agreement with GF with obligations to purchase all of its microprocessor and APU product
requirements, and a certain portion of its GPU product requirements, from GLOBALFOUNDRIES Inc. (GF)
with limited exceptions. If GF is not able to satisfy AMD’s manufacturing requirements, its business could
be adversely impacted; AMD relies on third parties to manufacture its products, and if they are unable to
do so on a timely basis in sufficient quantities and using competitive technologies, AMD’s business could
be materially adversely affected; failure to achieve expected manufacturing yields for AMD’s products
could negatively impact its financial results; the success of AMD’s business is dependent upon its ability
to introduce products on a timely basis with features and performance levels that provide value to its
customers while supporting and coinciding with significant industry transitions; if AMD cannot generate
sufficient revenue and operating cash flow or obtain external financing, it may face a cash shortfall and
be unable to make all of its planned investments in research and development or other strategic
investments; the loss of a significant customer may have a material adverse effect on AMD; AMD’s receipt
of revenue from its semi-custom SoC products is dependent upon its technology being designed into thirdparty
products and the success of those products; AMD products may be subject to security vulnerabilities
that could have a material adverse effect on AMD; data breaches and cyber-attacks could compromise
AMD’s intellectual property or other sensitive information, be costly to remediate and cause significant
damage to its business and reputation; AMD’s operating results are subject to quarterly and seasonal sales
patterns; global economic uncertainty may adversely impact AMD’s business and operating results; AMD
may not be able to generate sufficient cash to service its debt obligations or meet its working capital
requirements; AMD has a large amount of indebtedness which could adversely affect its financial position
and prevent it from implementing its strategy or fulfilling its contractual obligations; the agreements
governing AMD’s notes and the Secured Revolving Line of Credit impose restrictions on AMD that may
adversely affect its ability to operate its business; the markets in which AMD’s products are sold are highly
competitive; AMD's issuance to West Coast Hitech L.P. (WCH) of warrants to purchase 75 million shares
of its common stock, if and when exercised, will dilute the ownership interests of its existing stockholders,
and the conversion of the 2.125% Convertible Senior Notes due 2026 may dilute the ownership interest
of its existing stockholders, or may otherwise depress the price of its common stock; uncertainties
involving the ordering and shipment of AMD’s products could materially adversely affect it; the demand
for AMD’s products depends in part on the market conditions in the industries into which they are sold.
Fluctuations in demand for AMD’s products or a market decline in any of these industries could have a
material adverse effect on its results of operations; AMD’s ability to design and introduce new products
in a timely manner is dependent upon third-party intellectual property; AMD depends on third-party
companies for the design, manufacture and supply of motherboards, software and other computer
platform components to support its business; if AMD loses Microsoft Corporation’s support for its
products or other software vendors do not design and develop software to run on AMD’s products, its
ability to sell its products could be materially adversely affected; and AMD’s reliance on third-party
distributors and AIB partners subjects it to certain risks. Investors are urged to review in detail the risks
and uncertainties in AMD's Securities and Exchange Commission filings, including but not limited to AMD's
Quarterly Report on Form 10-Q for the quarter ended June 30, 2018.
1 AMD Ryzen Threadripper 2990WX CPU and the AMD Ryzen OC team achieved the highest benchmark score in the single socket desktop CPU
category in the following benchmarks:
• Cinebench R15 with Ryzen CPU at 5100MHz, score 7618 (previous single socket record at the time of the event was 5828 as per hwbot.org
18-core Cinebench R15 ranking (http://hwbot.org/submission/3738239_splave_cinebench___r15_core_i9_7980xe_5828_cb)
System configuration:
• AMD Ryzen Threadripper 2990WX 32/64T CPU
• ASUS ROG ZENITH EXTREME X399 motherboard
• 4x8GB Gskill DDR4-3200 memory (running at DDR4-3400 CL16-16-16-36)
• AMD Radeon RX 460 Graphics Card
• Liquid Nitrogen CPU cooling, -196C
• 512GB M2 NVME drive
• 1600W Power Supply

2 Overclocking AMD processors, including without limitation, altering clock frequencies / multipliers or memory timing / voltage, to operate
beyond their stock specifications will void any applicable AMD product warranty, even when such overclocking is enabled via AMD hardware
and/or software. This may also void warranties offered by the system manufacturer or retailer. Users assume all risks and liabilities that may
arise out of overclocking AMD processors, including, without limitation, failure of or damage to hardware, reduced system performance and/or
data loss, corruption or vulnerability. GD-106

3 ECC memory available only when enabled by the motherboard manufacturer. Check with your system provider for details and availability. GD-132