Hinweis: Dieser Inhalt ist eine Pressemitteilung des Herstellers. Planet 3DNow! prüft weder die Richtigkeit der Angaben noch die Art der Formulierung. Pressemitteilungen können subjektiv sein und geben nicht notwendigerweise die Meinung der auf Planet 3DNow! schreibenden Autoren wieder.
What’s New: Intel is well on its way to making the innovation delivered with Thunderbolt™ 3 available to everyone. Today, Intel announced that it contributed the Intel Thunderbolt protocol specification to the USB Promoter Group, enabling other chip makers to build Thunderbolt compatible silicon, royalty-free. In addition, the USB Promoter Group announced the pending release of the USB4 specification, based on the Thunderbolt protocol. The convergence of the underlying Thunderbolt and USB protocols will increase compatibility among USB Type-C connector-based products, simplifying how people connect their devices.
“Releasing the Thunderbolt protocol specification is a significant milestone for making today’s simplest and most versatile port available to everyone. This, in combination with the integration of Thunderbolt 3 into upcoming Intel processors is a win-win for the industry and consumers.”
–Jason Ziller, general manager, Client Connectivity Division at Intel
Why It Matters: Previously, Intel shared plans to integrate Thunderbolt 3 into future Intel CPUs and to release the Thunderbolt protocol specification to the industry. As detailed at CES 2019, Intel’s upcoming 10nm processor code-named “Ice Lake” will be the first to integrate Thunderbolt 3. Processor integration, combined with today’s announcement, is expected to drive large-scale, mainstream adoption of Thunderbolt.

“Realizing HP’s vision for the office of the future requires seamless connectivity, powerful performance and total simplicity to enable people to unleash their creativity wherever their workday takes them,” said Bill Gorden, vice president, Commercial Notebook Management at HP. “Thunderbolt 3 is a powerful addition to our new notebooks and docks that delivers the flexibility sought by IT departments and the experiences people love.” 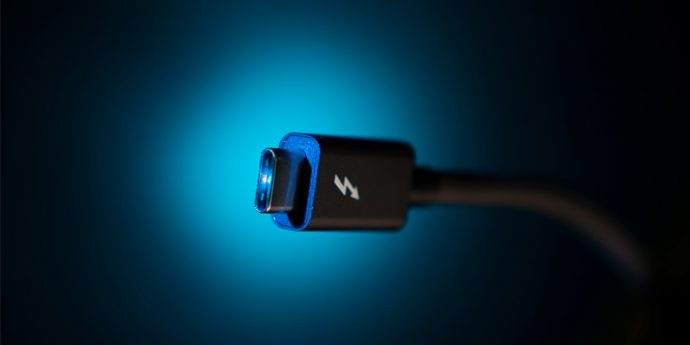 In March 2019, Intel Corporation announced that it has contributed the Thunderbolt protocol specification to the USB Promoter Group. The USB Promoter Group also announced the pending release of the USB4 specification, based on the Thunderbolt protocol. The convergence of the underlying Thunderbolt and USB protocols will increase compatibility among USB Type-C connector-based products, simplifying how people connect their devices. (Credit: Tim Herman/Intel Corporation)

How Thunderbolt Leads with Best-in-Class Solutions: Thunderbolt delivers world-class performance, ease-of-use and quality by unifying multiple industry specifications into an industry leading set of product capabilities. Thunderbolt is supported by an end-to-end solution enabling program for computer, peripheral device and cable makers to help ensure a consistent experience for all Thunderbolt connected products. Intel works with the industry to define product capabilities, validation testing and rigorous certification requirements, including:
Intel and other industry leaders continue to innovate on Thunderbolt technology to deliver a leading connectivity solution, from silicon and cables to PCs and peripheral devices.

Intel (NASDAQ: INTC), a leader in the semiconductor industry, is shaping the data-centric future with computing and communications technology that is the foundation of the world’s innovations. The company’s engineering expertise is helping address the world’s greatest challenges as well as helping secure, power and connect billions of devices and the infrastructure of the smart, connected world – from the cloud to the network to the edge and everything in between. Find more information about Intel at newsroom.intel.com and intel.com.

Intel and the Intel logo are trademarks of Intel Corporation in the United States and other countries.

*Other names and brands may be claimed as the property of others.