The thirteenth BOINC Pentathlon is over​

Part 2
Done. The 13th BOINC Pentathlon is history and once again offered something for everyone. TAAT was really up for it this year and managed to take the gold. But it was also exciting and varied behind them.

As expected, there were larger gaps at the Cross Country at PrimeGrid. Of the big teams, only AF slipped a bit. This discipline probably was the calmest for the observer this year.

As always, the Sprint at SRBase was short and painless. The fight for silver and bronze and for a few other ranks was exciting until the end.

Unfortunately, the medals were quickly decided at the City Run at Einstein@Home. However, we were compensated with the thrilling battle for #4, in which, appropriately enough, five teams were involved. There were also various small groups fighting for several ranks behind them.

At the Javelin Throw on NumberFields@home, the teams have now learned to weigh and use the tactical options. P3D managed to achieve their result with three optimal throws, while other teams had to throw once more. For example, SG had to throw four times, only to see that their main competitor did not throw at all. Other teams mixed up the field from behind, making it a challenge for the observer to determine the real standings.

With the Obstacle Run, there was also a change in the program again. Both the teams and the organizers gained experience here. How to make best use of the bonus days? What impact do they have? Universe@Home provided a basis for this that was not without problems, but hopefully provided the project with many important insights. Perhaps it was also because of the bonus days that the winner was not crowned until the final day, something that never happened before on the long track.

My heartfelt thanks again to the hardworking French translators, modesti and her new proofreader Andarta. I am sure that Cocagne watched from "above" and gave her approval.

pschoefer was responsible for the English translation, and special thanks go to him for the preparation. He is in contact with the projects, which was and is not unimportant...

It is great that this report is made available to a non-German-speaking audience this way. I am sure that this not only demonstrates the spirit of the competition, but also makes it so popular. Thank you very much!

Overall Standings
For the third time, TAAT, P3D, and TSBT shared the medals between them. SG was a bit closer this year, but could not take their chance. A solid core of teams has formed at the top to beat. TAAT, P3D, TSBT, SG, [H], CNT, RKN, and AF are among this core. This year, Ukraine and Team China were able to break through.

This year, 26 teams participated, of which 23 already participated last year. Beside the returnees of BOINC Confederation and BOINC Synergy, there was a newcomer, The Final Front Ear, who performed respectably.

And now the Overall Standings in detail. The results in the individual disciplines are given in parentheses in the order Obstacle Run - Javelin Throw - Cross Country - Sprint - City Run. As usual, I add my two cents to the best fifteen...

At least for TAAT, 13 was a lucky number this year. After taking silver in the last two years, they were really up for it this time and pulled out all the stops. It remains to be seen whether they can confirm this next year. 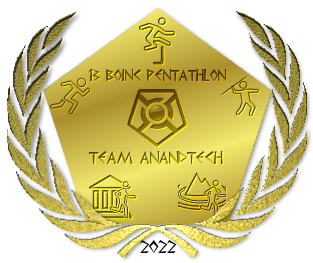 The Green Planet turned from the hunted to the hunter. They still managed to beat TAAT last year, but this was impossible this year. Nevertheless, they remain a strong team that once again was able to mobilize its potential, and with which we will have to reckon again next year. 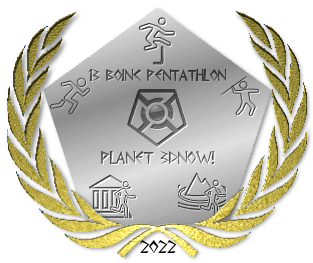 The Scots were difficult to assess before the start. It was not enough to fight for gold, and in the end there was a slight decline compared to last year. The slip-up at the Javelin Throw had no consequences in the end, but this was mainly because of the competitors. Without an improvement, it could be close next year. 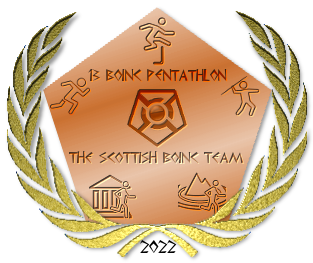 4th SETI.Germany (4-3-5-3-4) previous year: #4
Two bronze medals made this Pentathlon a success for the Blue and Yellows. However, the overall medal remained elusive for them in the end. The small slip-up in the Cross Country did not make the difference, there was one more bit missing. The Germans have to work on that and then they will be able to win a medal again.

5th [H]ard|OCP (5-5-4-6-5) previous year: #6
Always in the top 10 for five years, they showed a rock-solid performance once again. This is evident from their individual results. The trend was already visible last year, and they now have been able to build on it.

6th Czech National Team (7-4-6-5-6) previous year: #7
Having participated in the Pentathlon since the beginning and constantly in the top 10, the Czechs are a fixture at this competition. At the Javelin Throw, they came close to precious metal, which, however, remained elusive for them this year. They remain a hot candidate for individual medals in the future.

7th Rechenkraft.net (6-6-7-7-7) previous year: #8
The Rechenkrafties also established themselves in the top 10. They simply do not drop out of it since 2016. They improved on last year, again with a very stable performance. However, to achieve more they will have to do more.

8th Ukraine (10-7-10-8-12) - previous year: #13
Their best result in the history of this competition is a brilliant achievement, for which one can only congratulate, particularly given the current circumstances. The highlight was their result at the Javelin Throw, which was somewhat neutralized by the City Run, but still shows the potential of the team.

9th L'Alliance Francophone (9-9-13-10-11) previous year: #9
The Alliance has lost touch with the extended top since 2016. One year before that, they won their last medal. As the competition does not sleep and new teams keep coming from behind, it will be a challenge for them to stay in the top 10.

10th Team China (8-18-9-13-9) previous year: #25
They are back. While their wings were very lame last year and the skipped the year before that, the Chinese have come back. They are not yet as strong as in 2017 or 2018, but at least they have shown up again. The potential is still there and could pose a challenge for the top teams.

11th BOINC.Italy (13-16-8-12-13) previous year: #16
In the last few years, the Italians went downhill slowly, but steadily. It is nice to see that they were able to change this now. While it was not enough for the top 10, their best result since 2016 should give enough reason to celebrate with wine and pizza.

12th AMD Users (14-13-11-9-18) - previous year: #19
AMD Users could improve as well and confirm their previous best overall result from 2019. City Run and Obstacle Run did not really suit them and cost them points. I hope that they can confirm the good performance next year.

13th Crunching@EVGA (15-15-12-11-14) previous year: #14
They completed a solid Pentathlon and gained one rank. At first glance, a good result. However, three teams slipped by that they used to be able to keep behind them. The competition is getting stronger, this must give them food for thought. If they do not improve next year, there is a danger of falling down the rankings.

14th Overclock.net (12-14-15-17-10) - previous year: #11
The results of the overclockers were fluctuating. They did well in City Run and Obstacle Run, but lost again important points in the Sprint. Thus they had to let the stronger teams pass.

15th Meisterkuehler.de Team (11-12-18-15-19) - previous year: #20
Finally back in the top 15. After several good years, things have not been so smooth since 2018. Now they were able to improve significantly again. It is typical for the cool ones to concentrate on specific projects, this year these were Javelin Throw and Obstacle Run. They were not too far behind the top 10 there. Let us see what is possible next year.

Statistics
TAAT joins the list of now five overall winners. P3D continues to lead this statistic with 6 overall wins, in part because SETI.USA (3) has not competed for several years.

With now 8 individual gold medals, TAAT is now in #3 in the discipline statistics. However, P3D (17) and SETI.USA (15) are a long way ahead. P3D still has the most silver medals (26) and was able to massively expand this lead. The same is true for SG in terms of bronze medals, of which they now have 14 in their closet.


You see it will be exciting again at the BOINC Pentathlon 2023.