Imagine a herd of 650 adult Asian elephants. Now imagine lifting that entire herd off the ground with one gigantic hoist. That’s the 2,600-ton capacity of one of the world’s biggest construction cranes — known to all who behold it as “Big Blue.” Intel uses the crane to place steel infrastructure for its D1X chip factory expansion in Hillsboro, Oregon.

Owned and operated by Kennewick, Washington-based Lampson International, Big Blue travels the globe to construction projects that need some of the world’s heaviest loads slung skyward. At 460 feet long, the crane’s main boom is 155 feet taller than New York’s Statue of Liberty.

In Hillsboro, where Big Blue arrived this spring disassembled on 100 semitrailer trucks, Intel is gearing up to meet the increasing market opportunity for its advanced chips that run everything from sprawling internet data centers to thin-and-powerful laptops.

At D1X, Big Blue began its big job on a pre-dawn morning this spring hoisting a 200-foot-long, 277-ton double-truss frame – the first of 46 that comprise the factory’s steel superstructure. In addition to the monster beams, the D1X expansion will be reinforced with 24,000 tons of rebar — twice the weight of the Eiffel Tower. Work on the D1X expansion involves more than 3,000 electricians, plumbers, welders and other trade workers, with physical distancing enforced across the job site.

Oregon, with its 21,000 Intel employees, is home to the company’s largest site. 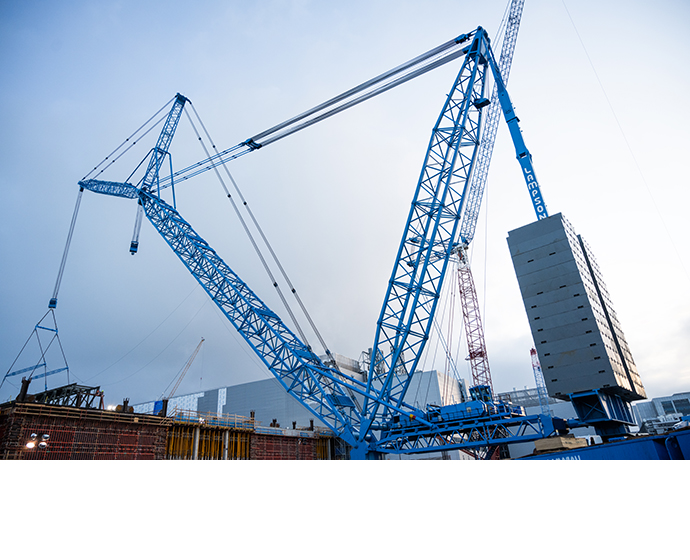 Intel (Nasdaq: INTC) is an industry leader, creating world-changing technology that enables global progress and enriches lives. Inspired by Moore’s Law, we continuously work to advance the design and manufacturing of semiconductors to help address our customers’ greatest challenges. By embedding intelligence in the cloud, network, edge and every kind of computing device, we unleash the potential of data to transform business and society for the better. To learn more about Intel’s innovations, go to newsroom.intel.com and intel.com.

© Intel Corporation. Intel, the Intel logo and other Intel marks are trademarks of Intel Corporation or its subsidiaries. Other names and brands may be claimed as the property of others.
Um antworten zu können musst du eingeloggt sein.