The twelfth BOINC Pentathlon is over​

After two exciting weeks the twelfth BOINC Pentathlon ended on 19 May 2021. 27 teams gave it their all in 5 disciplines.

A big thank you to the operators of this year's Pentathlon projects, as the competition would not have been possible without their support: SiDock@home (Marathon), World Community Grid - Microbiome Immunity Project (Javelin Throw), PrimeGrid (City Run), Einstein@Home (Cross Country) and NFS@Home (Sprint).

We'd also like to thank all participants and are looking forward to seeing you again at the thirteenth BOINC Pentathlon starting on 05 May 2022.

For your convenience there is a feedback page for hints, criticisms, wishes and suggestions to take on board for the next time: https://www.seti-germany.de/boinc_pentathlon/feedback.php?&lang=en.

Jeeper is now having a look at this year's Pentathlon results. All figures can be found here: https://www.seti-germany.de/boinc_pentathlon/statistiken/pentathlon.php?&lang=en.

Last year, seven teams were able to collect medals in disciplines. This year there were only four such teams. A development which was not predictable and which can hopefully be reversed next year. Nonetheless this Pentathlon was not boring, TAAT kept the race open for a long time. And there were many duels happening in the disciplines, keeping us entertained. The tactics of the teams did not always work out, and sometimes they gave raise to surprised outcries.

Tactics continue to be an important part of Pentathlon. Meisterkühler for example used the Sprint to shine, even at the risk of losing places in other disciplines. This kind of appetite for risk was not exhibited by the teams at the top this year, which is perhaps the reason for why so few teams were able to walk off with medals. Maybe more teams will dare to break cover next year.

12 Pentathlons lie behind us now. Volunteering and putting in many hours, crunchers like pschoefer, modesti, or pons66 contributed to the preparations e.g. of the organizing team. The effort involved in working with the projects to prepare the contest is enormous, but was handled perfectly by pschoefer.

A big thanks goes to the diligent translators again too. modesti took care again that the Francophones were well provided for, and xii5ku did the same for the English division. Many thanks from me for the swift and super translations.

Hip hip hooray, and many thanks to all (including the unnamed) who contributed in this year and previous years. It is a challenge each time, and good to see that it is made happen.

Of course there is always room for improvements and developments. We still have got many ideas.

Those who want to pitch in and help, please get in touch!

And now for the final Overall Standings. The placements in the individual disciplines are listed in the order of Marathon - Javelin Throw - City Run - Cross Country - Sprint. As usual I dedicate a little commentary to the top 15:

Three victories, and always on the podium, it's a clear-cut thing. But in the end, TAAT were a tough and inventive opponent who spurred the Green Planet to highest performances. Mobilization of the community is the big strength of the team which continues to push the boundaries. 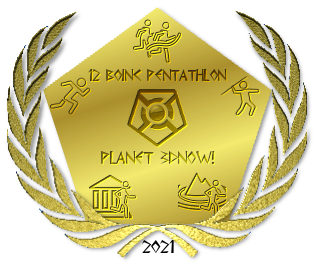 It almost looked as if they could join the crunching for overall victory. Yes, the Javelin was a slip. Its absence would have brought them level with the Green Planet but wouldn't have changed the placement in 2nd in the end. Four medals in disciplines make this one the most successful Pentathlon ever for them, and this is a cause for celebration. 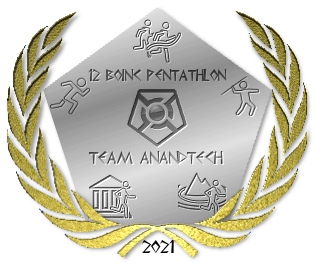 The winners of the previous two years need to content themselves with Bronze this time. A victory in one of the disciplines was not for them to take home either. Always just a little behind, they had to fight hard at the Javelin to defeat SG. They have to watch out next year, because the competition doesn't sleep. 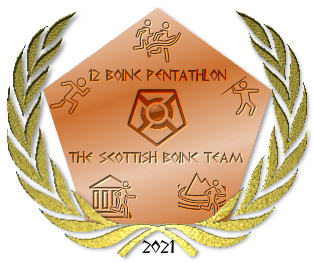 4 SETI.Germany (4-3-4-4-4) previous year: #4
For the fourth time in #4 in the overall standings, and four times in place 4. A stable performance which did not suffice for that special moment in the spotlight. SG can however maintain their contiguous serious of at least one medal in every Pentathlon. But the impression remains that here and there a little more would have been possible, as we witnessed at the last Javelin Throw. Yet SG remain a fixture at the Pentathlon, with future chances at medals.

5 LinusTechTips_Team (5-5-8-10-5) previous year: #6
After starting difficulties, the team made headway, and the final Javelin Throw showed the tactical qualities of the team too. It was a skintight fight in the end, they could make up for a slip-up at Cross Country on the home straight. Place 6 is the best placement in the overall ranking ever too.

6 [H]ard|OCP (6-6-7-6-8) previous year: #10
After the rather disappointing previous year, they are now back on track. The placements were stable, without particular highlights. A little improvement will make more possible in the future.

7 Czech National Team (7-8-5-8-6) previous year: #5
7th place (like 2017) is the lowest overall placement of the Czechs so far. Last year they were saved by a victory at Cross Country. And it could have turned out even worse, if not for the better results relative to RKN. They remained surprisingly modest in the disciplines. On the last meters, there was not a lot to be seen of CNT's strength of the past years.

8 Rechenkraft.net (9-7-6-5-7) previous year: #9
For the 6th time in succession, they made it into the top 10, and clearly at that. #7 was missed by just a blink of an eye, which shows their potential for the future. The small weakness at the Marathon was offset by the good result at Cross Country.

9 L'Alliance Francophone (8-10-9-11-9) previous year: #8
The francophone alliance is a fixture in the top 10. They made it in every Pentathlon, but the trend is slowly downwards. They didn't commit any major blunder but showed stable performance. This is no longer sufficient to attack in front, and makes then vulnerable in the future. They need to step it up a notch!

10 BOINC@AUSTRALIA (12-13-15-7-12) previous year: #13
The most successful Pentathlon lies behind the Australians. 7th place at Cross Country, and top 10 in the overall standings let the corks pop. A price for this was 15th place at the City Run however. A reprise next year will be a challenge, because the competition doesn't sleep.

11 Overclock.net (15-17-11-9-13) previous year: #12
It's a few years now since they last stood on the podium, and they were locked out of the top 10 in the last years too. And yet they were always so close. Especially at the end they lost chances due to Marathon and Javelin Throw. This is like in the previous year when two disciplines prevented a better placement. Improved tactics appear to be called for.

12 Team 2ch (11-9-10-19-18) - previous year: #17
During the first few days it looked as if the Japanese would not accomplish a lot, but then they put the pedal to the medal and gained momentum. 12th place is their best standing since 2013. The Sprint was their Achilles' heel which robbed them of their chance at top 10.

13 Ukraine (13-14-19-13-14) - previous year: #11
They once again held their own in midfield. The City Run cost them many points, furthering their points deficit. Other than that they performed consistently.

14 Crunching@EVGA (18-19-12-14-19) previous year: #22
After three rather weaker years, the team is back in more familiar territory with #14. They probably profited from track conditions; the running was smoother where GPUs were utilized. Pure CPU disciplines appeared harder in comparison. This highlights the challenge for the coming year.

15 In Science We Trust (10-15-13-18-o) - previous year: --
To describe the performance of the newcomers in a single sentence is not really easy, perhaps: There could have been so much more. Here and there potential was shown, on the other hand, points were left on the table, like at the Sprint. And yet this was not compensated for by better placements elsewhere. And so they remain a black box.

Statistics
P3D climbed to the top by number of gold medals in disciplines. With 17 medals they displaced SETI.USA with 15 medals. 3rd place is shared by SG and TSBT with 7 medals each. P3D still have the most Silver medals (22), SG the most Bronze medals (12). TAAT advanced to #5 in the medal count of the disciplines. TSBT brought their first three Bronze medals home, previously they collected Gold and Silver.

While SG is the only team which won at least one medal in each Pentathlon, P3D can be proud to have gathered the most discipline medals, 47 by now. SETI.USA (35) and SG (31) have some catching up to do.

In the overall standings, P3D collected their sixth Gold medal, could snag precious metal for 11 times in 12 Pentathlons, and are the most successful team on this count too.

Now it's over. Already. Time flew by so fast. Let's enjoy this pleasant feeling now and take it along.

And of course the first thoughts are turning to the next year.
- Who can beat Planet 3DNow!?
- Will SETI.USA dare a comeback?
- Can SETI.Germany reach for an overall medal once again?

You see it remains exciting at the 13th BOINC Pentathlon 2022.