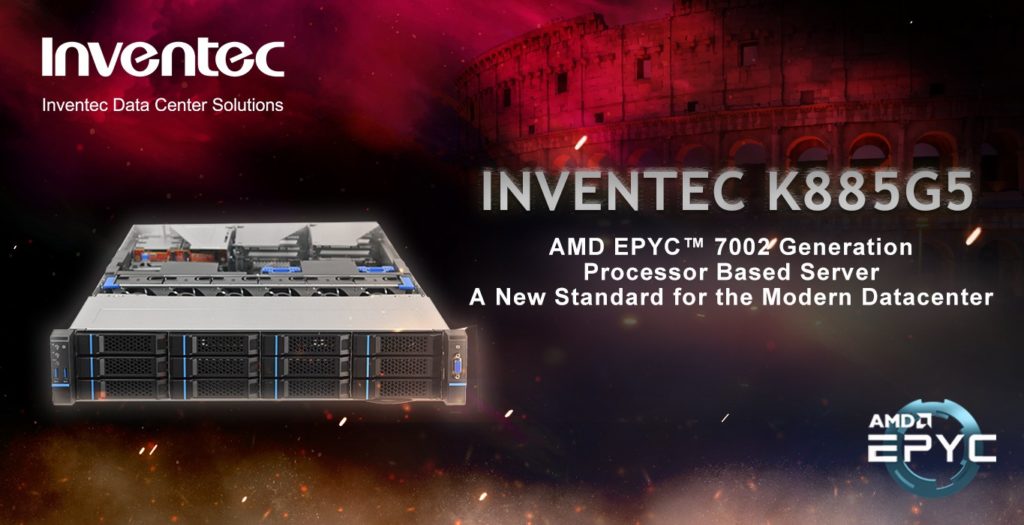 During the launch, Inventec also unveiled its new K885G5 server which is compatible with the AMD EPYC™ 7002 series processors and will be able to efficiently and reliably handle the large amounts of data brought along by the AMD EPYC™ 7002 Series.

The new series can also enable datacentres to be more responsive to increasing workloads. Delivering a comprehensive, consistent feature set of I/O, memory and security features, across 8 to 64 "Zen" 2 cores, the AMD EPYC™ 7002 Series Processor delivers agility from a balanced set of features.

With embedded security features, the processors help customers to better defend their CPU, applications, and data.

This processor series will be well-support by Inventec's state-of-the-art K885G5 server which is designed to enable datacentres to accept and respond large amounts of requests.

K885G5 series target comprehensive applications in virtualization, hyperconverged storage, cloud computing, and high-end enterprise server, among others, with impressive TCO reduction benefited from the industry-leading core density and jump in performance. In addition to highly serviceable 2U enclosure, K885G5 offers scalability and flexibility including
"As AMD strategic partner, we always try to deliver innovative next-generation products that can meet the demand for reliable support for very large, high-usage deployments. As a high-performance 2U server system based on dual-socket 7nm AMD EPYC™ 7002 Series Processors, K885G5 is designed for today's software defined infrastructure, offering a visionary but consolidate solution for next-generation workloads to come.", said Jack Tsai, President of Inventec Enterprise Business Group.

"We're excited and thankful to have our partners supporting the launch of AMD EPYC 7002 Series Processors," said Scott Aylor, Corporate Vice President and General Manager, Datacenter Solutions Group, AMD. "Their EPYC based solutions are poised to deliver a new standard for modern datacenter customers. With twice the cores, breakthrough performance and embedded security features, all delivered by a leadership architecture, customers can transform their datacenter operations at the pace of their business."

Inventec Data Center Solutions (Inventec EBG) was established in 1998 and has been focusing on the design and manufacturing of server systems in Inventec Corporation. Over decades, Inventec EBG has been the key server system supplier of the global branding clients.

Follow "Inventec Data Center Solutions" on LinkedIn and Wechat to receive their latest news and announcements.

AMD, the AMD Arrow logo, EPYC and combinations thereof are trademarks of Advanced Micro Devices, Inc. Other product names used in this publication are for identification purposes only and may be trademarks of their respective companies.

Projections as of July 3, 2019. AMD 2nd Generation EPYC processor projected SPECrate®2017_int_base performance scores are developed using computer modeling of each processors rev B0 which is then adjusted for the individual targeted frequency. For EPYC 7282, 7272 and 7252, estimated configurations have 4x channels per socket of DDR2666 memory, and all other models have 8x channels per socket of DDR3200. All estimates use the AOCC compiler. Projected score only, actual results may vary. Results may vary with production silicon testing. AMD EPYC 7742 SPECrate®2017_int_base projected score of 625 vs. EPYC 7601 of 304 in June 2019 at http://spec.org/cpu2017/results/res2019q2/cpu2017-20190411-11817.pdf. 625 / 304 = 2.056 = 2x the performance. SPEC®, SPECrate® and SPEC CPU® are registered trademarks of the Standard Performance Evaluation Corporation. See www.spec.org for more information. ROM-23

[ii] Estimated generational increase based upon AMD internal design specifications for "Zen 2" compared to "Zen". "Zen 2" has 2X the core density of "Zen", and when multiplied by 2X peak FLOPs per core, at the same frequency, results in 4X the FLOPs in throughput. Actual results with production silicon may vary. ROM-04